I keep hens. We inherited some when we moved here; we were given three as a thank you, and we’ve bought a couple more. With assorted deaths (both unplanned and natural), we now have four, two of whom must be so ancient they are having a lovely retirement roaming around, eating lots, but not actually laying any eggs. Which – and I hate to be demanding – is their primary purpose. The two others take it in turns to lay an egg if they feel like it. Frankly with four people here, demand was outstripping supply.

Last year we bought half a dozen fertile eggs to go under Speckle when she was broody. Only one hatched: Frankie, a beautiful dark Maran. I may have bored you with pictures of her last summer. Given those odds, we bought a small incubator and decided to buy some more fertile eggs to see if we could do any better, but before we did, Noggin arrived.

Noggin is magnificent: part Buff Orpington (that’s posh pedigree). He has come to stay with us because his early rising woke his previous neighbours. Perfect timing. Hello Noggin. He immediately made friends with the four new women in his life. Frankie is his favourite: she is as besotted as a hen can be. The two old ladies (imaginatively named Mrs Fluffy and Mrs Chatty) put up with him, although I have to say Mrs Fluffy, our tiny bantam who is about a quarter of Noggin’s size, has taken to emerging from the henhouse later than usual to avoid Noggin’s early morning amorous attentions. I don’t blame her.

So: a few weeks after Noggin had been Mr Lover-Lover, we collected four eggs from Frankie and two from Speckle, and put them in our incubator. Twenty-one days later it all got quite exciting. The eggs had been peeping for a couple of days, and wobbling.

First cracks appeared over night. Nobody wanted to go to school that day. 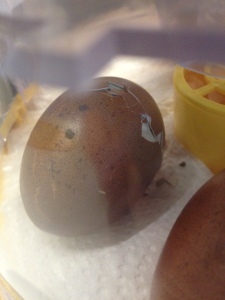 When I got back from the school run, the crack on one egg had got bigger. It stayed like that for most of the day, rocking and peeping.

By the evening, it was more exciting than telly.

The first chick was out before bedtime. It looks a bit steamy in there because we had to keep the humidity so high to help them get out of the eggs.

Two were out that evening, and we moved them into a box by the Aga to keep warm. By breakfast time two more were out.

Last wet yellow chick, just before it had a spell down my jumper.

The following morning the last egg had finally got going, and our fifth and last chick was out by about 9am (one egg never developed). By that time the incubator was so wet it was never going to dry off, so I tried putting it in the box with the others. They were all fluffed up and decided they were much older and meaner, and started to peck it, so I put it down my jumper to dry off. Barbara Good would have done the same.

They are now five days old. The only member of our household who isn’t feeling overcome with cutemania is Darcy, my elderly cat, who has been banished from his usual warm Aga spot on account of his snacking tendencies. It won’t be for long. 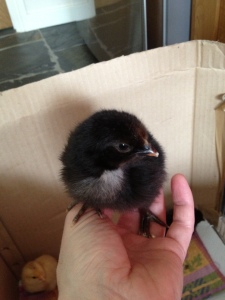 Now we just have to wait to discover how many of them are girls, and find other homes for the boys. Anyone want a cockerel?

“Because of the rearrangements and the innovations of the recent past, a woman in Ireland who wishes to inscribe her life in a poem has a better chance now to move freely around within that poem.” (Eavan Boland)