I saw the The Quartet last night, which is a film about a retirement home for musicians. And singers, but that’s a different joke. I was nervous. Nervous because, as a cellist, if I see an actor pretending to play an instrument badly it starts my eye twitching, toes curling and eventually brings on one of my turns involving throwing something at the telly and pouring more wine.

However, from the first scene, I relaxed. They had musicians – real musicians – playing instruments. There was no eyebrow waggling over a piano top (more of that later). The film was a triumph (adapted by Ronald Harwood from his own play) with director Dustin Hoffman masterfully steering the final scene of an operatic quartet away from us actually having to witness Maggie Smith attempt Rigoletto. He knew it would ruin it.

Other film-makers are not so deft.

He’s supposed to be playing a Stradivari.

Now, I’m as big a fan as anyone of Mr Cumberbatch. To some of us, he will forever be destined for Swiss Air, Princess Theresa of Liechtenstein on his arm. Others fell in love with him as Sherlock. I enthusiastically embraced his mind palace, his high-functioning sociopathic tendencies and his IQ. But when he picked up his violin … oh dear. Apparently he had lessons from the bloke who actually played on the soundtrack, and obviously learned how to hold the thing. But when he started moving the bow, it was clear he is as much a violinist as the Duracell bunny is a percussionist. Benedict, darling. Just say no.

If you’re an ABBA fan, you may wish to skip this paragraph. It may be too painful. You may have to send out … an SOS. Am I making myself understood? For all Pierce Brosnan’s twinkles and charm, and the Bond allure he has banked, he blew it all away when he opened his mouth to sing in Mamma Mia. Meryl Streep demonstrated her acting skill by not revealing that it was a deal-breaker, right there. 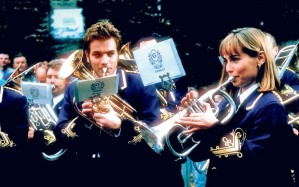 Films are not all dreadful at this. Tara Fitzgerald made a decent go of playing the cornet and/or flugelhorn (huge online arguments exist) in Brassed Off. Apparently Ewan Mcgregor used to play French horn, so at least he had a workable embouchure. But they both have to bow to Victoria Wood’s triumphant performance in her piss-take of them, when she makes it clear she knows how to play the trumpet.

Lori Singer was part of the original Fame gang. Sorry to harp on about cellists (if one can mix’n’match images), but she was a cellist before she got that acting job, and it showed. She can play. It probably wasn’t her fault that she was told to fling her hair around like a thinner, more American Jacqueline du Pré. And she did The Muppets. That’s cool. 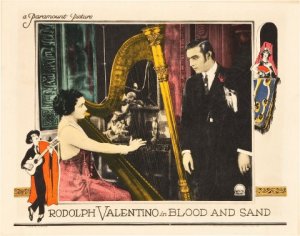 I’m told that Nita Naldi produced some very realistic harp playing when she seduced Rudolph Valentino in 1925, in Blood and Sand. I haven’t seen it, but here’s a picture. She looks on top of it to me.

Finally, we arrive at the piano players. The piano has always lent itself kindly to films, being of such bulk it is the work of a moment to get it between the camera and any musically-challenged actor. It has a convenient shelf, where you can pretend to put your hands while at the same time peeping brightly over the top of the instrument for all the world as if you laughed in the face of trilling in thirds.

You can be a wit, as long as the camera doesn’t pan too low. Lizzie Bennet can take on both Mr Darcy and Colonel Fitzwilliam whilst playing recitative. Mrs Hurst can get one up on poor Mary Bennet after her father has told her she has delighted them long enough, with a furious paced bit of Mozart. We must imagine her hands, like a swan’s feet, blurring beneath her supercilious expression, hinted at only by some elbow flapping and an eyebrow lift.

Ah, the eyebrows. With hands hidden, many actors overcompensate in the eyebrow department. It has been suggested to me that Anna Chancellor did just this in the recent Mapp and Lucia, but I like to think this was totally in character. Lucia would have played like that. It’s all very Italian.

David Tennant, god bless him, is many things, but an organist isn’t one of them. As Doctor Who, he found he needed decibels that only a vast pipe organ can produce. That episode managed to tick two of the toe-curling bingo boxes for me: firstly, David was entirely unconvincing despite calling carelessly over his shoulder that you don’t hang around with Beethoven without picking up some tips; and secondly the Hand Double Shot. David is angular and young(ish). The hands shown playing actual organ chords were altogether chubbier and lacked any acting zeal. There really should be strict riders in acting contracts regarding the acting ability of Hand Doubles. If there can be that much small print about Stunt Bottoms, surely the industry can sort this in the name of musical integrity?

I don’t have room here to talk about the perfection that was Eric Morecambe, André Previn and Grieg. Or Dudley Moore playing Colonel Bogey in the style of Beethoven. Or Les Dawson. They deserve a whole blogpost to themselves.

The final word on acting pianists must go to Gerard Depardieu, whose character in Green Card pretends to be a composer invited to play at a social gathering where – for complicated reasons involving Andie MacDowell, an upstairs greenhouse and a sham marriage – he has to go through with it. That film already struggles with an actor trying to get away with not being able to act (but that never seems to stop her). Gerard’s brilliant response is to channel an avant-garde atonal composer with such conviction that his audience was enraptured. Confused, but enraptured. You must wait the full 1 min 15 seconds for his final note. Watch it here. It’s worth it.