Shopping tantrums, or how to enrage the middle classes

Sometimes I have to go to a supermarket with my three-year-old. Today’s experience was so educational I think I should share it.

It started well. We were in a supermarket so middle-class the shelf-stackers can offer opinions on Plutarch’s influence on Shakespeare’s history plays if you want. Let’s call it Fêtechôse.

The three-year-old and I wandered round with her sitting happily in the trolley, squashing up as we put more stuff in. We passed a number of members of staff. Some waved, some chatted. All smiled. At the child in the trolley. Where she had sat on every previous visit. Let’s just remember that fact.

At the checkout, we were informed that she had to get out of the trolley ‘for legal reasons’. This was late morning. Blood sugar was low. It was not a good time.

So, explaining to my daughter she wasn’t allowed in the trolley any more, I tried to remove a suddenly feisty octopus with really sticky suckers. I pulled. The trolley followed us. Daughter invoked the Density Rule, which means the crosser she gets the harder it is to lift her weight. Eventually I won, leaving an increasingly noisy crumple of child on the floor as I turned to pack the shopping, only slightly out of breath.

I paid, and tried to leave. Daughter had other ideas. Start the clock.

After a few attempts to get her to her feet, worrying my eardrums were going to burst from their proximity to decibel hell, I wandered off in the direction of the door, calling ‘bye then!’ at her cheerily. This usually works. She merely hit the Turbo Tantrum button and went – as I believe the term has it – off on one. 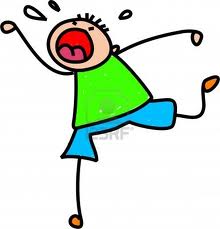 I’ve just recovered from months of bad back, brought on by hefting my daughter around. I can’t just pick her up under one arm and wander about: I’ll snap. So I try to resort to patience and reason.

It took ten minutes to get her to the door, with me walking ahead and calling. She did some of it on her knees: perhaps she thought there was a network of laser beams above her head?

It took another struggle to get her through the automatic doors (I went ahead, just around the corner, from where I could see her through the window and hear her wails). By this stage, we were attracting quite the audience.  Fêtechôse shoppers aren’t used to such spontaneous street theatre, and showed their inexperience in various ways. At least five separate people stopped to ‘help’ her, looking around wildly for the callous or forgetful parent who had clearly abandoned her. After a few calls of “it’s ok, she’s mine!” they mostly  smiled and left us to it. Some did not.

A car-park chap surprised me by shouting quite suddenly from behind that he expected me to “get down on the floor and join in” because he’d seen it on the telly. This fact was corroborated by another couple just about to go in. How we laughed. When it became clear that I wasn’t going to “join in” they stopped laughing and got on with their own lives.

When we finally got her out of the door we had only the car to reach. It was metres away. It might as well have been on the moon. Daughter demanded a piggy-back (she knows I can do those even if I can’t pick her up normally any more). I crouched down, but she refused to get on. Trying to scoop a soggy blancmange from the pavement onto your back is impossible. We gave up, causing a renewed tantrum.

I again went ahead on the green walkway. She again shuffled forward on her knees. If I stopped, she stopped. If I walked, she shuffled. I guessed that was the way to get to the car, since she was safely on the walkway, and carried on. By this time we had EVERYBODY’S attention. The full force of middle class righteousness is not to be belittled. I had reached the car, opened the boot, put the shopping in and was returning to my small yelling dynamo when the latest woman who had stopped to comfort my daughter turned on me.

I won’t repeat everything she said, because it would have to be all in capitals to convey her tone and frankly I find that exhausting. To summarise (please imagine the pointing, shouting and tiny flecks of spit coming out of the corners of her mouth): I was not a responsible adult, if someone had reversed over my daughter it would have been my fault, and she hoped the cameras had caught it (so did I, as I half-feared she was about to assault me). After walking away a bit, she turned and shouted some more, saying it was a good thing that a caring person like herself had stopped to help. I thanked her. She strode into the shop, telling every onlooker she passed that I was an unfit mother. There was more pointing.

Meanwhile, my daughter agreed to climb onto my back and I staggered to the car with her almost deafening me. We were up to about forty minutes by then. It took twenty more to get her to sit in her car seat and allow me to do up her seatbelt, because I wasn’t prepared to force her.

We drove home. I think I’ll become an agoraphobic internet shopper from now on. Fêtechôse deliver, after all.

18 Comments to “Shopping tantrums, or how to enrage the middle classes”