Glasto or Glyndebourne: Mozart and mud

Confession time: I went to the opera at Glyndebourne for the second time this year, to see The Marriage of Figaro again. And I didn’t even have to sell a kidney, which is a bonus. If you’re going to get high blood pressure when I talk about Mozart and opera, perhaps this post might not be for you. Although there will be a fair amount of laughing at rich people.

Figaro is my very favourite opera. I first got to know it by sitting in rehearsals aged about seven, hearing my mother sing the part of Cherubino. They were singing in English, so I could understand the story (always a bonus in opera, even though plots don’t usually stand up to much scrutiny). Then a while after that I got chicken pox or something equally bed-ridden, and played the cassette (see me after class if you don’t understand that word) of that performance on a continuous loop for a week. I REALLY know this opera.

If you don’t, it’s a farce based on Pierre Beaumarchais’ play La folle journée, ou le Mariage de Figaro, written in 1784. There is love, betrayal, war, droit de seigneur, disguises, cross-dressing, fighting, jumping out of windows and broken flowerpots (here’s a proper synopsis). There is also some of the most beautiful music ever written.

Glyndebourne started in 1934 in a Sussex country house and gardens. Now it seats 1,200 people in an opera house built in 1994. People come to hear opera and eat picnics in the gardens during really long intervals. It’s like a posh, classical Glastonbury. In evening dress and high heels. Work with me here.

You arrive mid-afternoon and park your car amongst the terribly expensive ones. There may be a bit of car-park ostentation: rise above it.

Have a wander round the gardens and pick your spot for a picnic later. Watch out for the ha-ha: just beyond this line of people there is a large trench to keep out cows and all but the most determined pole-vaulting sheep. One can easily lose a careless guest.

Wander round the lake, admiring the lilies, thanking god that nobody’s decided to build a giant Mr Darcy here to scare the pants of you with its amateurish papier mâché looming.

There’s a secret mulberry tree. They weren’t quite ripe when we went, but when they are you can drop one in champagne to turn it pink.

Their walnut tree is doing much better than ours. Not envious. 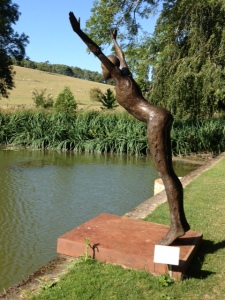 Do not be alarmed at the sculptures, no matter how lifelike they seem at first. Remember you’ve probably had a glass of wine.

not be alarmed at the price of the sculptures either.

W
When you hear a bell, follow the wafting Chanel inside. I wan’t allowed to take pictures of the stage, so you’ll have to imagine the air-conditioned excitement before that famous overture started. When the Count and Countess arrived in a real car on stage and got a round of applause before either of them sang a note, I knew this was going to be good.

Luckily, we’d not packed the recommended four-course picnic served by a butler at a table with a candelabra (yes, I’ve seen those), and were finished before this raincloud dumped its contents on the expensively coiffured and bejewelled audience. By the time most of them straggled under cover, jackets clinging unflatteringly to paunches, dresses looking as if the wearer had taken an impromptu dip in the lake, we were sipping coffee at the bar and waiting for Mozart to start again.

This second time around we’d managed to get returned tickets, so my husband and I had separate seats, swapping at half time. Because he has led a sheltered life without much exposure to telly or the twentieth century, he failed to warn me I’d be sitting next to Esther Rantzen after the interval. I didn’t even say ‘sausages’ or pretend I had a wonky eye.

This is the outside of the new building. Note the kiltage on the left (there was an abundance of that on this visit) and the woman on the right wearing a barcode.

Lastly, they have a shop. Of course they have a shop. You can buy all the Glyndebourne essentials there, including a custom-adapted picnic hamper golf bag, with adjustable shelving. I’m sure for the price they were asking you can have it in your own personal tartan.

You can see a recording of last year’s Figaro production available online until the end of this month. 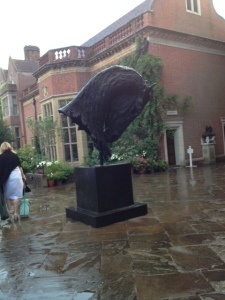 4 Comments to “Glasto or Glyndebourne: Mozart and mud”