Laughing in the face of Health and Safety

That’s a small question with an enormous answer, and I won’t pretend I can do it here. Mr Casaubon in Middlemarch spent his life trying to tie together the Key to all Mythologies – or, as Douglas Adams put it more succinctly in Dirk Gently, the fundamental interconnectedness of all things.

In short: we all hold differing opinions on what is important, and usually the single common opinion is that mine is more right than yours. As a child I used to work out what I could do without for longest: air, food or water. Eventually I decided that temperature trumped them all, since I could hold my breath for longer than it would take me to boil to death in a witch’s cauldron. (I was reading a lot of fairy tales.) It’s all a question of immediacy.

Yesterday was one of those days that taught me something. I like to poke a bit of fun at people: you know that. I think laughing is good, and deflating pomposity even better. With all the kerfuffle about Lord ‘wandering hands’ Rennard possibly returning to the House of Lords, I tweeted:

“If Rennard does sit on the House of Lord benches today, I hope those sitting either side of him stroke his thighs constantly.”

By my standards (and I know they are low compared to some), it went a bit viral. It got retweeted by my followers, then picked up by some Westminster journalists. By the end of the morning Sally Bercow had added me to a twitter list of ‘interest’. It was retweeted nearly 50 times and favourited nearly 20. I was feeling giddy, with a career in political satire beckoning.

Just before lunchtime, my four-year-old daughter’s school called to say she had managed to throw herself off a bike and smash her head open. 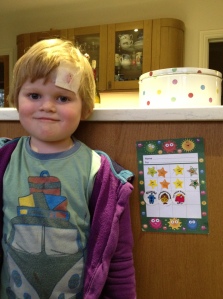 That was important. Suddenly what rich politicians did with their hands really didn’t matter. I arrived at school to find a wibbly little girl with blood in her hair who needed her mummy. Although the bump was an alarming size, she wasn’t concussed so we didn’t bother our local A&E. By the time we got home she was more proud of the three stickers she’d been given for being brave, and we spent the afternoon reading stories & playing maths bingo. There’s no finer way to test for concussion than a bit of mental arithmetic. I have middle class pushy mum standards to maintain, after all.

My tweet continued its journey, and I had some funny exchanges over it. I discovered it is, after all, important what politicians do with their hands. When you have time to think about it.

I need both. Of course health is everything. I realise the witch’s cauldron is the bottom line. But if I did nothing else – once my kids are fed, warm and safe – my brain would implode. Rule One of First Aid is that you must keep yourself safe before rushing in to help others. If you end up a casualty, you are no good to them.

All of which is a convoluted way of defending my right to poke fun and laugh at people. It works for me.

6 Comments to “Laughing in the face of Health and Safety”

"I wanted to read or hear the narrative of someone else – a woman and a poet – who has gone here and been there." (Eavan Boland)