Today is the third and final day of the inaugural Winchester Poetry Festival. I wish I could have taken three days out of my life to go to everything, since it was right on my doorstep, but my children simply refuse to be self-sufficient yet. Perhaps age four is too young to expect that. 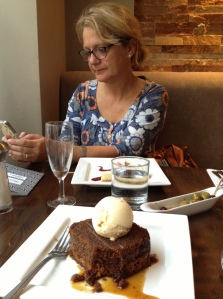 She tweeted about poetry. Mine were basically about puddings.

Poets and poetry-lovers flocked (yes, I think we can say ‘flocked’) to the city for a packed, diverse programme. I managed to sneak an early supper with poet Josephine Corcoran, who has become a great friend through Twitter but we’ve only managed to meet fleetingly at a previous poetry event.

Josephine had been at the Festival all day, but we both had tickets to hear Michael Longley, Julia Copus and David Constantine read last night. David and Julia each read moving poems that drew much appreciation from a very attentive audience – and I would seek them out to hear them again – but for this post I want to try to explain what happened when Michael stood up to read.

You’ll just have to imagine him standing here.

I wish I’d taken a picture of him. He’d dressed for comfort, in trousers that were worn slack (I approve, having put away most of that sticky toffee pudding above) and held in place over his belly with a pair of red braces. Over his shirt he’d put on a sleeveless garment that I’m challenged to name: a gilet? Waistcoat? Nothing seems to describe the naturalness with which he wore it, for all the world as if he’d just returned from walking dogs and happened upon a room with a few poems. The whole ensemble of white hair and beard, bright, kind eyes and glasses half-way down his nose suggested that perhaps we were discovering what Santa does during the summer holidays.

He unscrewed the top of a water bottle and balanced it on the slope of his belly while he told us a bit of background to what he was about to read, ending the anecdote with a killer line, our laughter giving him the time to take a swig of water straight from the bottle. I learned to watch the bottle: if he reached for it I knew a good story was coming.

He read poems spanning his whole career, juxtaposing an early love poem, The Linen Industry, with one written decades later after more than thirty years of marriage. Holding the book in his left hand, his right conducted the words out of his mouth and over our heads, his extraordinarily long third and fourth fingers giving his surprisingly youthful hand an ethereal look. There was such nuance in those fingers. His voice, always preceded by a small clearing of his throat, was mellifluous. I know that is a word on the banned list for poets, but I cannot think of a better one to describe him.

There were poems of war, for his father who had fought in WW1. He told us of his twin brother, and how he felt when he died: “It is a great thing to be a twin; it is a great thing to lose a twin”, and read a poem he had written on his first birthday alone. He was generous, letting us into slivers of his life. There were times when I couldn’t applaud, still rocked by what he had just said. Those eyes twinkled with mischief, and he knew exactly what he was doing.

And then, when we thought it was all over, he read a new poem commissioned by the Festival. Typically, he thanked Robert Hutchison, Chair of the Festival Committee (and, we discovered, a former student flatmate of Michael’s), for giving him the poem.

Yes, I admit, I fell a little in love with Michael Longley last night. On the way out, when someone else had collared him to sign a book as he sat on the front row, I reached forward and touched his knee, saying “Thank you. It was wonderful.” The utter delight that creased his face will stay with me for a long time. Yes, he knows exactly what he is doing.