Feminist hat on. Strap in. That’s all the warning you get.

BBC Radio 4 has a programme called ‘Woman’s Hour’, which has a long and mainly righteous history of airing and discussing issues relevant to women in a world that tries to mute us. Yes, they have their quota of cooking tips and fashion as well as cerebral discussion of how to function in the patriarchy, but given that the programme started as an hour of company for the little housewife while she went about her domestic duties in 1946, that is to be expected.

All of what follows has a caveat. I hope it is a joke. Later today, I might be able to update this post with a pretty-feminist-with-a-sense-of-humour-titter, and admit I was taken in. I would embrace the potential embarrassment. Meanwhile …

Well, hello false dichotomy. “Messy or dressy?” God knows I’ve been backed into rhyme and metre corners before, but the day you start throwing out sense to hit those targets is the day you should hang up your poetic towel. But that’s just the title: we’ve a lot to get through. Keep up.

There are nine questions, each with three possible answers. You know the Electoral Commission employs people specifically to look at important questions governments want to ask, to evaluate implied bias? They have that job because, as any parent or even slightly manipulative person will know, phrasing is everything. I have rarely seen (aside from archly rhetorical anti-feminist hate speeches) a register used that falls so far on one side of the fence you could see it employing a scorched earth policy to stop you approaching.

Let’s have a little look at them together, shall we? (Did you find my tone just then annoying? Feeling patronised? You ain’t seen nothing yet.)

Their three-tier answer approach is aimed to corral the hapless interviewee into three stereotypes of womanhood. First answer means you are basically feral, and must shoulder the pity heaped upon you from the supercilious, plucked and polished Glossy Bossy. Second answer allows you some wiggle room to deviate from the bald sheen of their idea of ‘normal’. Third answer is clearly the one to aim for: only the coiffured elite could maintain this level of grooming. Whether you would have time to be literate enough to read the questions is unclear.

The register in all the first tier of answer choices is flatly condescending. We have accusations of dribbling (with all the implications of sub-standard hygiene attached), infantile language phrased as faux innocent questions, and in the final question the added link between being ugly and reading books. I always knew education was dangerous: here is our proof.

I applaud the quiz’s commitment to character. They paint an internally coherent picture of how Glossy Bossy would see an intellectual superior, making sure to undermine every potential point of celebration of brain over “beauty”.

I won’t share the delight of all nine questions with you – if you’re interested, you can do the quiz yourself. But a few gems shone out amid the ‘crock of shit’ (not my phrase, alas: the wonderful Jenny Landreth coined that one).

Q6: How often do you remove your body hair?

Leaving aside the embedding of an achingly bad pun and assumptions of bluestocking, upper class, buck-toothed hilarity, the ‘moderate’ middle way admits it is expected and completely normal that a woman will endure pain to present herself to a man. (I’m assuming these answers are aimed at straight women. Can’t imagine why …) There is a brilliant video of a ‘Sexy Getting Ready Song’ which I’ll leave you to google yourself, illustrating this exact point. It is in no way safe for work.

Fittingly, I have written this during today’s Woman’s Hour. They haven’t yet been in touch to say they were joking. I can wait. 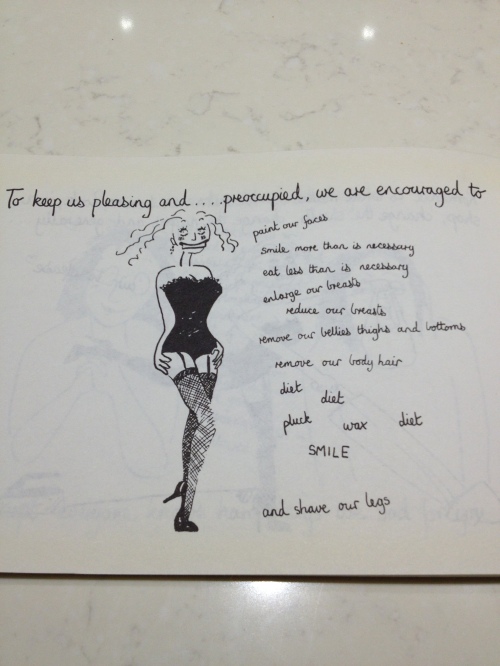