‘Written by Women’ at Basingstoke Literary Festival – June 23 to 26 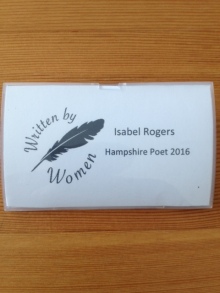 I’ll be Writer in Residence for the Written by Women strand of Basingstoke Literary Festival next weekend (23-26 June). Look: it’s official. I have a badge and my face on the front cover of the flyer and everything. This post is a bit of a list – pay attention at the back. Ignore if you’re nowhere near Basingstoke.

It’s part of my role as Hampshire Poet, and one I’m really excited about. There are loads of events under this Written by Women strand, from workshops to author talks to family interactive sessions. I’ll be there all weekend, sharing what’s going on via social media and producing mini-blogs, which I’ll put in a separate section of this site (you won’t get emailed every time) and link to via Twitter.

In the last couple of weeks I’ve been working on a project called I Am Jane, which will kick off the weekend’s events. Proteus Theatre Company, a film-maker and I have been visiting two Basingstoke comprehensive schools to work with girls and young women, exploring how Jane Austen’s life and theirs connect. Jane grew up in Hampshire, and we’ve been finding out how much their lives have in common: a lot of the preoccupations of teenage girls two hundred years ago are similar to those of today. They are putting together a multi-media show to explore these connections, and we’ll be presenting their gala film screening on Thursday 23 June in Basingstoke Discovery Centre.

Here are some of the other events going on over the weekend, with links if you’d like to book:

On Friday 24 June the writer Della Galton is running a daytime workshop on How to Write and Sell Short Stories – suitable for beginner or experienced writers. She’ll look at the market for short stories and give practical tips, advice and feedback. 11am-3pm, Basingstoke Discovery Centre, £20. Book here.

Also on Friday 24 June at 6pm, the writers Tammy Cohen and Antonia Honeywell discuss their books and writing generally. Tammy’s new novel, When She Was Bad, is a taut and compelling read. Antonia’s novel The Ship is a chillingly realistic dystopian London, and was chosen as one of The Independent’s best Young Adult books of 2015, and Antonia was selected to be one of Amazon’s Rising Stars of 2015. Their conversation will be superb. Basingstoke Discovery Centre, £5. Book here.

My workshop on Saturday 25 June is at Basingstoke Discovery Centre at 10am – we’ll be exploring why poets choose to write in a strict form or abandon it altogether. Some of us are afraid of form because we think it’s difficult or old-fashioned and twee. I reckon we need to be able to look form square in the eye and understand it before we can let it go. I have two hours to convince people to agree with me! There are still some places if you fancy coming along – it would be great to see you there. The cost is £8 for a two hour workshop. Book here.

Later on Saturday 25 June I’ll be taking part in a special Loose Muse event at 6pm, which will feature writers Agnes Meadows and Sarah Mussi. I’ll be reading a couple of poems, along with Sue Wrinch, plus there will be an open mic. Do come along, either just to listen or share some of your own work! Basingstoke Discovery Centre, 6pm, £5. Book here.

On Sunday 26 June, I’ll be joining the Shed of Stories in the Market Square, Top of the Town, Basingstoke. There will be storytellers from Proteus Theatre Company, puppets, and stories – this is a family event. I’ll be in a corner helping anyone to try some creative writing, and apparently we get to use real quills! This could get messy. We’ll be there between 11am and 3pm, so do drop in.

After that weekend, I’ll just have time to draw breath before I’m organising the poets at Winchester Hat Fair on 2 July, but more of that later …